Can God Use Donald Trump? 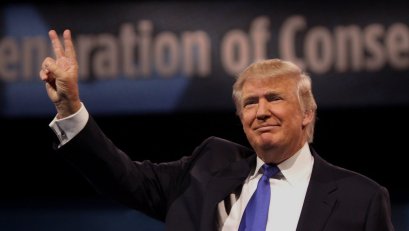 When Donald Trump first became a legitimate political entity this past summer, some people called him the “Trump” or “Trumpet” of God. These individuals believed that he was being used by God to call attention to important issues. Others said that he was not genuine in his intentions. Can God use Donald Trump? Is this a ludicrous or legitimate argument?

First, let’s make one thing clear. The man has brought to light some very important issues, such as immigration and terrorism. He is appealing to the common person in a way that the other candidates are unable to do so. I don’t want to negate his effectiveness at this point. Could his intentions be wrong? Of course! The question remains – can God use Him?

Before we answer this question, I think it is important to consider the example of King Nebuchadnezzar. He is one of the few individuals in the Bible to be directly called a servant of God. Let’s read, “Now I will give all your countries into the hands of my servant Nebuchadnezzar king of Babylon; I will make even the wild animals subject to him.” (Jeremiah 27:6 – see also Jer. 25:9, 43:10). The Lord actually rewarded Nebuchadnezzar! “I have given him Egypt as a reward for his efforts because he and his army did it for me, declares the Sovereign Lord” (Ezekiel 29:20).

God used this man to uproot kingdoms and to punish the people of Judah, who were in open rebellion against God. He was an instrument to do the will of God; the will of God was in his heart. I was talking with two of my great friends, Niles and Lynda Davis this weekend about this subject. Lynda pointed out that Nebuchadnezzar had wise, obedient, and God fearing servants in his court. Daniel would be the chief example. If it these Godly people were not around Nebuchadnezzar, his reign would be been much different.

Though these men did not come into the king’s full service until after he had been used a servant of God, the point remains valid. Daniel and other wise people of God were active throughout most of Nebuchadnezzar’s reign. There were a lot of sorcerers in his court, but among them stood the righteous people of God. Only the wisdom of the righteous could help this man.

The Bible tells us that “Walk with the wise and become wise, for a companion of fools suffers harm” (Proverbs 13:20). One of the most important aspects of being a president is who you choose to be around you. Nebuchadnezzar had a mixed group of unrighteous and righteous people around him. God sent dreams to Nebuchadnezzar that only the righteous could understand. In other words, God worked in Nebuchadnezzar’s life in such a way to allow His people to come forth. They spoke identity and destiny into his life.

So far, Mr. Trump has been seen around a mixed group of people. Some are wise, some unwise. Nebuchadnezzar did not receive the Godly influences in his life until after he became King. After a person is elected president they elect the cabinet and special advisors. One of the most important aspects of being a president is who you choose to be around you. Past presidents that did not have tremendous political knowledge compensated by having great advisors.

One thing led to the downfall of Nebuchadnezzar. Daniel 4:29-32 tells us, “29 Twelve months later, as the king was walking on the roof of the royal palace of Babylon, 30 he said, “Is not this the great Babylon I have built as the royal residence, by my mighty power and for the glory of my majesty?” 31 Even as the words were on his lips, a voice came from heaven, “This is what is decreed for you, King Nebuchadnezzar: Your royal authority has been taken from you. 32 You will be driven away from people and will live with the wild animals; you will eat grass like the ox. Seven times will pass by for you until you acknowledge that the Most High is sovereign over all kingdoms on earth and gives them to anyone he wishes.”

Pride led to this mighty king’s downfall. The Bible tells us, “Pride goes before destruction, a haughty spirit before a fall.” (Proverbs 16:18) This man was humbled because he chose to give credit to himself rather than give credit to God. It was God who sets up kings and takes them down (Dan. 2:41). Everyone must have the humility to see that they can be lifted up or brought low.

How does Donald Trump measure up to Nebuchadnezzar in this example? Let’s look at an interview he had this past summer with Frank Lunz. This is an excerpt taken from the interview. “People are so shocked when they find … out I am Protestant. I am Presbyterian. And I go to church and I love God and I love my church…” Whether or not he asks for forgiveness, he said, “I am not sure I have. I just go on and try to do a better job from there. I don’t think so,” he said. “I think if I do something wrong, I think, I just try and make it right. I don’t bring God into that picture. I don’t.” Trump said that while he hasn’t asked God for forgiveness, he does participate in Holy Communion. “When I drink my little wine — which is about the only wine I drink — and have my little cracker, I guess that is a form of asking for forgiveness, and I do that as often as possible because I feel cleansed,” he said. “I think in terms of ‘let’s go on and let’s make it right.’”

A link to the full CNN article is located at the bottom of this article.

He plainly stated that he does not ask for forgiveness, but then later admits that in a sense he does. It sounds confusing. In Proverbs 16:6, the Bible tells us, “Through love and faithfulness sin is atoned for; through the fear of the Lord evil is avoided.” Mr. Trump admitted that he tries to make things right, which seems to line up with Proverbs 16:6. However, the verse in Proverbs does not negate the fact that we must still confess our sins. Without forgiveness, we cannot be cleansed from our sins. Confession must be made (Acts 2:38, Romans 10:9-10). The true sign of our repentance is by our lifestyle. We all have to repent. “All have sinned and fallen short of the glory of God” (Romans 3:23).

It is concerning that Mr. Trump does not come out in the open and say “Yes, I am a sinner in need of God’s grace.” God gives grace to the humble. Mr. Trump must be careful that he does not take credit for success. He must publically give God glory. So far, his campaign has been very “I” and “me” focused. Donald Trump often walks this fine line. He rarely, if ever, gives credit to someone else –at times he will applaud another person’s efforts and abilities.

Though Donald Trump is not considered the most God-fearing individual by the Word of God, neither was Nebuchadnezzar. Nebuchadnezzar still worshipped idols at times in his reign (see Daniel 3 as an example). After the event in Daniel 3, it seems he did begin to fear God.

Based on this example, God could use Donald Trump now and then introduce wise men after his term begins. His life could always change as the right influences gather around him. God can always intervene.

Donald Trump is a very controversial figure, and he walks a fine line on some very important spiritual issues. The example of Nebuchadnezzar shows us that God can use Donald Trump – but the final question is this:

Will Donald Trump allow himself to be used by God?